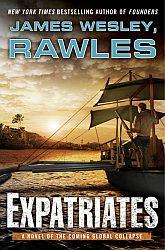 Expatriates: A Novel of the Coming Global Collapse

Expatriates: A Novel of the Coming Global Collapse

This is Rawles’ latest novel, set during a future global collapse. It features characters in different parts of the world coping with life stripped of modern conveniences and technology.  People must rely on each other, and trust is as big a commodity as gold or silver. The novel follows Patriots (2009), Survivors (2011), and Founders (2012), all of which follow concurrently what Rawles calls “the coming collapse,” making it possible for readers to jump into the beginning of the end at any point. For dystopia and action fans.

In the thick of these political maneuvers, an American family of missionaries living in the Philippines and a Texan petroleum engineer in Australia must face the fear of being strangers in a world in flux. Are their relatives back home healthy and safe? Will they ever see them again?

In its depiction of the authentic survivalist skills and techniques needed to survive a global socioeconomic meltdown, Expatriates is as informative as it is suspense-filled.

James Wesley Rawles has been an enthusiastic survivalist since his teenage years. He is now a survivalist author and lecturer and the editor of www.SurvivalBlog.com. He has a Bachelor of Arts degree from San Jose State University with minor degrees in military science, history, and military history. A former U.S. Army intelligence officer who held a Top Secret security clearance (with Special Background Investigation) and access to Sensitive Compartmented Information (SCI), he was awarded Officer specialty 35A (tactical all-source intelligence officer), and the additional skill identifier 5M (electronic warfare officer). He achieved the rank of Captain, attended the Army NBC defense officer's course, as well as Northern Warfare School at Fort Greeley, Alaska.