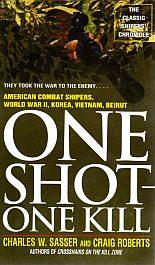 One Shot One Kill

In World War II, Korea, Vietnam, and Beirut, American snipers honed the art of delivering a single deadly shot from nowhere ? and devastating enemy morale. They met the enemy on his own turf, picking off officers, unwary soldiers, and even other snipers from extraordinary distances of up to 1 ? miles. Now, these uncommon men tell their stories: of the emotions felt when a man's face came into their crosshairs and they pulled the trigger, of the nerve-wracking hours and days of waiting, motionless, for the enemy, of the primal savagery of a sniper duel.

Often trained haphazardly in wartime, and forgotten in time of peace, combat snipers were officially recognized after the Vietnam War, when the Marine Corps became the first military branch to start a full-time sniper school. ONE SHOT-ONE KILL is their powerful record of desperate trials and proud victories.