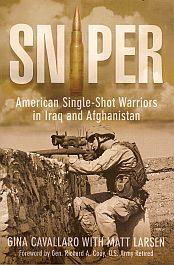 Heart-pounding real-life tales from the military's most experienced snipers, the best of the best snipers in action today. Gunfights, long distance shots, stalking, and more.

From the peaks of Afghanistan's Hindu Kush to the subtropical marshes of south central Iraq, American snipers have braved heart-pounding situations to hit their human targets dead-on. Few military feats stir the imagination like the image of a pair of riflemen waiting quietly in a building, in a bomb crater or a mountain pass for the enemy to walk into their crosshairs. Sniper comprises real-life tales from the military's front line snipers, their hits and their misses, the anguish of loss and the anxiety of the first kill. Authors Gina Cavallaro and Matt Larsen provide riveting accounts of Soldiers and Marine scout snipers on the battlefield, take a rare look at how Rangers and Special Forces snipers train and operate and why the war on terror has changed the role of military snipers.