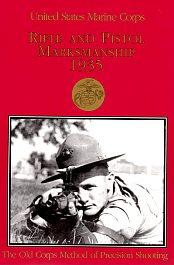 The purpose of this manual is twofold: First, to present the subject of marksmanship training in such a manner as will be of the most assistance to the inexperienced officer who, through force of circumstances, will have to supervise and carry out the entire training of his company or detachment; second, and to standardize the system of instruction and training for the Marine corps.

The methods herein described have been given a complete test; in fact they are a development of training methods used at the large ranges of the Corps and are considered as being the best yet devised.

The manual includes instruction with the .22-caliber rifle, .30-caliber rifle, the pistol, and the subjects related to the training with and firing of such weapons. Although the rifle is the basic weapon for the Marine Corps, yet the exigencies of the service are such that each man should have some training with the pistol, and as many men with the Browning automatic rifle and Thompson submachine gun as the ammunition allowances permit.