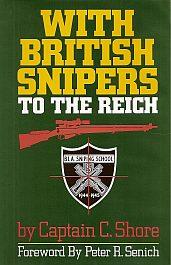 With British Snipers to the Reich

With British Snipers to The Reich is one of the scarcest and most sought after works on military shooting. The author was a sniper instructor with the British Army as it moved through Europe in 1944-45 and wrote this classic hands-on, nuts and bolts, how to sniping book chapters include British weapons and equipment, all sniping pistols, machine guns, foreign weapons, German weapons training, history of British Sniping, British snipers in World War II, hunting as sniper training and more.