MAGAZINES, YOUR GUN’S LUNCHBOX - Is a drum right for you? 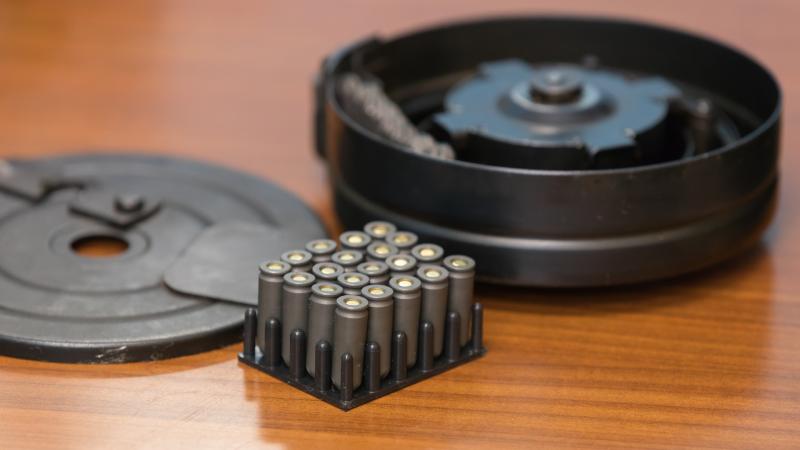 BIGGER ISN'T ALWAYS BETTER—OR IS IT?

Let’s get some answers and explore the advantages and disadvantages of a drum magazine.

Before we consider anything else, it helps to have a little background info—specifically, what a drum magazine is and alternatives to a drum magazine. On the latter, you’d be looking at box magazines.
As a reminder for those who might be just starting out in gunmanship, a BOX MAGAZINE consist of a container, a spring and a follower. The follower, propelled by the spring, applies upward pressure to cartridges contained inside the magazine body, continually feeding cartridges into the receiver. This style is simple with little more than a box with a follower that applies upward pressure on ammunition, the result is a constant stream of ammo fed into the chamber of your firearm.
A drum magazine isn’t so different. It also uses a spring-loaded follower to apply pressure on the ammunition and continually feed it into the firearm’s chamber. The main difference in design is that the ammo is stored in a spiral around the center of the magazine, facing the barrel’s direction. The drum magazine can also require a special tool to load, although it is easier to load than a box magazine.However it should be mentioned that drum magazines often require additional specialized attention. Many drums must be wound prior to use. Making them less than ideal for reactionary actions, such as home defense. Winding a drum requires 10 to 15 seconds and fine motor-skills, both of which are in short supply during an adrenaline dump. Winding ahead of time weakens the springs and reduces the drums reliability even more.
Which one is better comes down to personal preference. However, common wisdom holds that drum magazines are better for use on the range or simply as a “fun” accessory, while box magazines are more common for self defense.
With that out of the way, on to the advantages and disadvantages of a drum magazine. That way, you can decide for yourself if they are worth using.

ADVANTAGES OF A DRUM MAGAZINE

Despite claims that drum magazines are only suitable for the range, several armies have fielded weapons with drum magazines over the years, including the United States. That’s because this high-capacity magazine does have some definite advantages, chief of which is its high capacity.
Drum magazines holding upwards of 100 rounds aren’t uncommon, but smaller capacity options, such as the AK-47 75rd Drum, 7.62x39, are particularly popular. If you believe more is better, then you’ll be hard-pressed to find a better magazine for your AK-47 or other rifles than a drum magazine. As outline by the United States Marine Corp, drum style magazines are designed for missions that are likely to have a long, controlled first engagement situation-this requires ammunition. 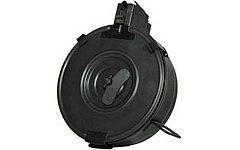 AK-47 75rd Drum, 7.62x39
For the ultimate in capacity for an AK-47, this 75-round drum can't be surpassed. Made on original tooling, these magazines are identical to ones issued with Chinese RPK light machine guns all over the globe. The crank design permits the magazine to be stored loaded with no spring tension (meaning no fatigue) and then cranked when ready to be used. The 2-piece clam shell body allows for ease of loading and maintenance. Benefits also include fit with most common variants of the Kalashnikov in 7.62x39mm. However, drum magazines will not fit unconverted Saiga® rifles without a generally simple modification to the rifle.
Another perceived advantage of a drum magazine for recreational shooters is the simple fun that comes with hitting the range with a high-capacity magazine. You’ll reload less and shoot more, which is hard not to enjoy. Just be ready to burn through some serious ammo—and fast. The AK-47 75-round drum magazine mentioned above feeds from a central column, resulting in a fixed center of gravity while firing. These lightweight 75-round aluminum drum magazines load from the back, so you don’t have to insert rounds under tension. Ready for any contingency, they can be stored indefinitely at the full 75 round capacity with no tension on the spring. When ready for use, twist the central crank to provide proper spring tension.
Some shooters also claim that drum magazines are better for shooting in the prone position as most have the same profile as a 30-round box magazine. Of course, that’s very much a matter of opinion and not true for all drum magazines. For example the 90 Round Drum for AR-15 offers a unique drum configuration that gives it roughly the same overall height profile as a standard 30-round PMAG, making storage less of a difficulty and shooting from various positions — including prone — no different than with smaller capacity magazines. 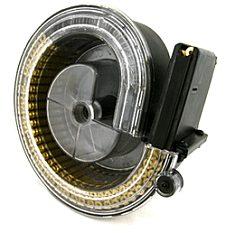 90 Round Drum for AR-15
Ninety rounder for AR-15. It is made of advanced high impact polymer which is rustproof and shrugs off the abuse that would dent metal magazines. It features a clear face cover for easy round count.
This information really only applicable for rifles fitted with drum magazines, actually. On a pistol, a drum is likely to be larger than any box magazine, and many feel they are the worst option for prone shooting. That being said, MANY shooters of the Mini-14 platform swear by the simple fun offered at the range with a drum style magazine. Based on a combat tested and battle proven design, a drum magazine will increase both the capacity and the fun factor from your Mini-14. You will enjoy more time at the range shooting and less time reloading magazines when you use a 90-round drum magazine with your trusty Mini-14. 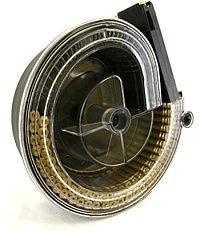 90 Round Drum for Mini-14
The ninety rounder for Mini-14. It is made of advanced high impact polymer which is rustproof and shrugs off the abuse that would dent metal magazines. It features a clear face cover for easy round count.

DISADVANTAGES OF A DRUM MAGAZINE

One of the chief complaints about drum magazines is the weight of a full drum. There are some downsides in regards to weight, with having a drum magazine that carries 100 rounds, rather than three separate magazines containing 30 rounds a piece. For starters, the addition of all that ammo makes the gun extraneously heavy, making it take longer to bring to bear. Also, the added girth of the drum can interfere with firing positions as mentioned above.
This aspect is only an issue if you have to carry the drum for long distances, but it is still a valid complaint. A related criticism is that drum magazines are challenging to reload in the field. They can also be difficult to mount on the gun, and if you’re using a drum magazine in a pistol shooting from a prone position becomes nearly impossible. All the above has mostly reserved their use to the range.
An additional problem with drum magazines is that they are both expensive and more complex than a box magazine. The cost issue is personal but consider that you can usually get three or four box-type magazines for the same price as a single drum magazine.
The complexity also means that drum magazines require more attention and specialized knowledge when it comes to maintenance and care. For example, internal lubrication is necessary for many types of drum magazines to help with the transfer of so many rounds—otherwise, overheating can be a problem.
Perhaps one of the most notable disadvantages of a drum is its lack of reliability compared to a box magazine. It’s true that all magazines will eventually fail, but some are far more durable than others.
Consider the standard Glock, or Magpul style AR platform box magazines. Chances are you’ve never had one fail on you (as long as you don’t drop them repeatedly) because they are built to last. Drum magazines have many moving parts and are especially vulnerable to jamming from dirt and debris.
Lastly, consider the size of a drum magazine. You can easily carry several box-type magazines in your pockets or magazine holsters but try that with several drum magazines. They are simply too bulky to carry around easily, even if their high capacity typically makes carrying more than one unnecessary. This is why many owners of drum magazines choose to use box style magazines as their "backup" options for their kit needs. A vast majority of shooters choose to carry standard 30-round capacity mags for subsequent reloads to reach a balance of weight and reload capabilities/speed.

WHAT ABOUT OTHER FIREARM OPTIONS?

In civilian use with semi-automatic rifles and shotguns, drums are best suited for defending fixed positions, such as homes. Where light weight and mobility are less important than being able to turn back a determined assault, drums have a place in our ready kits. In such cases, heavy barrels are advisable as well. While bulkier than individual box magazines, drums are more space-efficient when heavy volume of fire is needed. This gives you the ability to take your tactical shotgun to unbelievable levels. 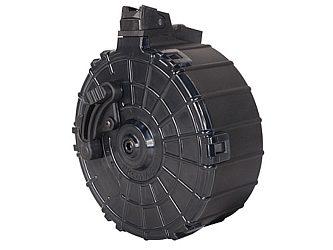 Saiga 12 Gauge 20-Round Drum Magazine
The ProMag Saiga 12 20-round drum magazine is constructed of high strength carbon fiber reinforced polymer. This drum will only work with 12 gauge 2-3/4" shells. The drum features steel inserts in the feed lips for long-term durability, and reliable operation. The loading lever on the back of the drum makes filling this 20-round drum magazine easy.

SHOULD YOU BUY A DRUM MAGAZINE?

As mentioned, at the end of the day, based on personal preferences the disadvantages could outweigh the advantages of using a drum magazine over a box style magazine. I see no reason not to have one just for the sheer fun it can provide at the range so long as you’re aware of their limitations and read up on proper care.
For the most part, box magazines are more maneuverable, durable and lighter than drum magazines. Conversely, drum magazines provide tons of ammunition already attached to the gun, reducing the need to reload. Drum magazines might be more fun on the range, but box magazines would be more reliable for a home defense use.
Box mags have far more reliable than drums and when utilized in a semiautomatic weapon the drums offer very little advantages. In an end of the world scenario I would be inclined to keep one drum attached to my rifle and as many ammo-filled magazines as I can carry. After all, most of us aren’t going to need 50-100 round capacity when out hunting, and the field is where drum disadvantages become more problematic. When it comes to practicing your aim, your best bet is to give a drum magazine a try for yourself.